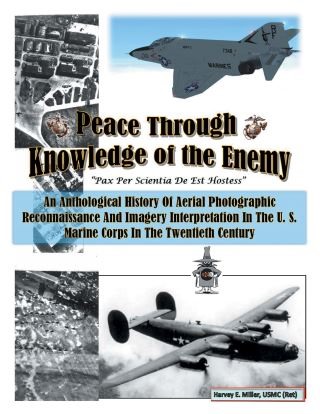 Peace Through Knowledge of the Enemy

The writing is an anthological history of aerial photographic reconnaissance and imagery interpretation in the U. S. Marine Corps in the Twentieth Century. This anthology covers the birth of photographic interpretation in the U.S. Marine Corps, the training evolution of imagery analysts from their cartographic roots, the transition from propeller driven aircraft to high performance reconnaissance jet aircraft, the evolution from hard copy photography to digital softcopy imagery, advancements in sensor technologies and remote sensing, and the emergence of the Marine Corps first Unmanned Aerial Vehicles.

Harvey E Miller USMC (RET): Harvey Miller is a retired Marine Corps imagery analyst of 22 years and has been serving as an intelligence professional within the intelligence community for over 41 years. He has served in many capacities over his career from being a photographic interpreter and imagery analyst serving operational commanders in combat, to providing critical intelligence products and services to combatant commands and national level policy makers. He has filled critical positions as a photographic interpreter, photogrammetrist, imagery analyst, national systems specialist, imagery scientist and instructor of advanced imagery phenomenologies, to being an office director of a major intelligence agency. Currently, he serves as the chief of imagery sciences for a national intelligence agency and is a volunteer docent for the National Museum of the Marine Corps in Quantico, VA.