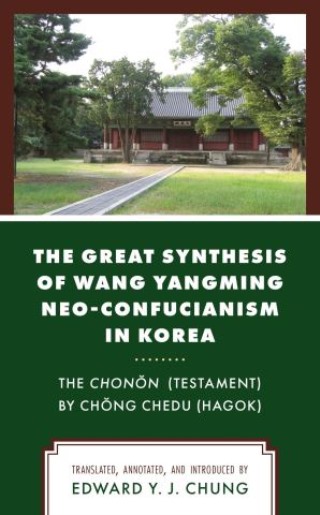 The Great Synthesis of Wang Yangming Neo-Confucianism in Korea

Translated, edited, and introduced by Edward Y. J. Chung, The Great Synthesis of Wang Yangming Neo-Confucianism in Korea: The Chonŏn (Testament) by Chŏng Chedu (Hagok), is the first study in a Western language of Chŏng Chedu (Hagok, 1649–1736) and Korean Wang Yangming Neo-Confucianism. Hagok was an eminent philosopher who established the unorthodox Yangming school (Yangmyŏnghak) in Korea. This book includes an annotated scholarly translation of the Chonŏn 存言 (Testament), Hagok’s most important and interesting work on Confucian self-cultivation. Chung also provides a comprehensive introduction to Hagok’s life, scholarship, and thought, especially his great synthesis of Wang’s philosophy of mind cultivation and moral practice in relation to the classical teaching of Confucius and Mencius and his critical analysis of Zhu Xi Neo-Confucianism and its Sŏngnihak tradition. Chung concludes that Hagok was an original scholar in the Sŏngnihak school, a great transmitter and interpreter of Yangming Neo-Confucianism in Korea, and a creative thinker whose integration of these two traditions inaugurated a distinctively Korean system of ethics and spirituality. This book sheds new light on the breadth and depth of Korean Neo-Confucianism and serves as a primary source for philosophy and East Asian studies in general and Confucian studies and Korean religion and philosophy in particular.