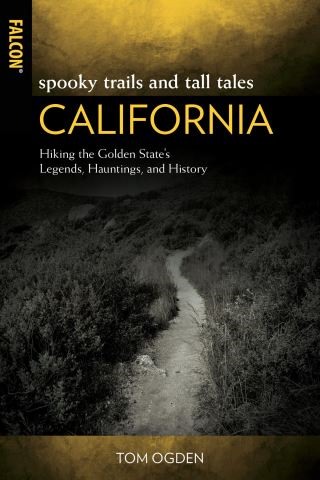 California is home to Hollywood stars, gorgeous vineyards, and some of the most haunted areas of the country. Its immense wilderness has been the setting for mysterious disappearances, unsolved murders, and bone-chilling supernatural occurrences. Exploring all the spookiness the state has to offer has been a difficult challenge… until now.

Spooky Trails and Tall Tales California features different spooky stories across northern, central, and southern California. Accompanying each of these captivating tales is hiking information for the brave reader interested in venturing into the wilderness to test their mettle. Written in an engaging, “campfire-style” voice and with dozens of stories and hikes throughout, readers will discover and explore the haunted history of the Golden State.

Tom Ogden: 1/21/15 bio for Haunted Hollywood 2e Tom Ogden is one of America’s most celebrated magicians. He has performed professionally for forty years, from the tinsel and sawdust of the circus ring to the glitter and sequins of Las Vegas, Atlantic City, and Lake Tahoe. He has opened for such acts as Robin Williams, Billy Crystal, and the Osmonds. Ogden’s television work has included appearances on NBC’s The World’s Greatest Magic II and FOX’s The Great Magic of Las Vegas, as well as numerous commercials. He has twice been voted Parlour Magician of the Year at the famed Magic Castle in Hollywood and has received a dozen nominations in other categories. He has also appeared as a humorist, motivational speaker, and performer for corporations such as Disney, Xerox, Pepsi, KFC, and Sears. Ogden’s books include 200 Years of the American Circus (which was named a Best Reference Work by both the American Library Association and the New York Public Library), Wizards and Sorcerers, The Complete Idiot’s Guide to Magic Tricks, The Complete Idiot’s Guide to Ghosts and Hauntings, and The Complete Idiot’s Guide to Street Magic, as well as eight books in the Globe Pequot Press “Haunted” series. He has also been profiled in Writer’s Market. Tom Ogden resides in Los Angeles.