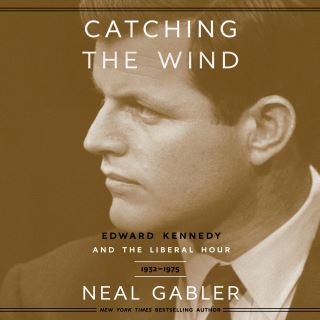 The epic, definitive biography of Ted Kennedy—an immersive journey through the life of a complicated man and a sweeping history of the fall of liberalism and the collapse of political morality.

In the tradition of the works of Robert Caro and Taylor Branch, Catching the Wind is the first volume of Neal Gabler’s magisterial two-volume biography of Edward Kennedy. It is at once a human drama, a history of American politics in the late twentieth and early twenty-first centuries, and a study of political morality and the role it played in the tortuous course of liberalism.

Though he is often portrayed as a reckless hedonist who rode his father’s fortune and his brothers’ coattails to a Senate seat at the age of thirty, the Ted Kennedy in Catching the Wind is one the public seldom saw—a man both racked by and driven by insecurity, a man so doubtful of himself that he sinned in order to be redeemed. The last and by most contemporary accounts the least of the Kennedys, a lightweight. He lived an agonizing childhood, being shuffled from school to school at his mother’s whim, suffering numerous humiliations—including self-inflicted ones—and being pressed to rise to his brothers’ level. He entered the Senate with his colleagues’ lowest expectations, a show horse, not a workhorse, but he used his “ninth-child’s talent” of deference to and comity with his Senate elders to become a promising legislator. And with the deaths of his brothers John and Robert, he was compelled to become something more: the custodian of their political mission.

In Catching the Wind, Kennedy, using his late brothers’ moral authority, becomes a moving force in the great “liberal hour,” which sees the passage of the anti-poverty program and the Civil Rights and Voting Rights Acts. Then, with the election of Richard Nixon, he becomes the leading voice of liberalism itself at a time when its power is waning: a “shadow president,” challenging Nixon to keep the American promise to the marginalized, while Nixon lives in terror of a Kennedy restoration. Catching the Wind also shows how Kennedy’s moral authority is eroded by the fatal auto accident on Chappaquiddick Island in 1969, dealing a blow not just to Kennedy but to liberalism.

In this sweeping biography, Gabler tells a story that is Shakespearean in its dimensions: the story of a star-crossed figure who rises above his seeming limitations and the tragedy that envelopes him to change the face of America.

Neal Gabler: Neal Gabler is the author of five books: An Empire of Their Own: How the Jews Invented Hollywood; Winchell: Gossip, Power and the Culture of Celebrity; Life: the Movie: How Entertainment Conquered Reality;  Walt Disney: The Triumph of the American Imagination; and, most recently, Barbra Streisand: Redefining Beauty, Femininity, and Power for the Yale Jewish Lives series. His essays and articles have appeared in numerous newspapers and magazines, including The Atlantic, Vanity Fair, Esquire, Playboy, Newsweek, and Vogue, and he has been the recipient of two Los Angeles Times Book Prizes, Time magazine's nonfiction book of the year, USA Today's biography of the year, a National Book Critics Circle nomination, a Guggenheim Fellowship, a Public Policy Scholarship at the Woodrow Wilson Center, a Shorenstein Fellowship at the Harvard Kennedy School, and a Patrick Henry Fellowship at Washington College's CV Starr Center. He has also served as the chief nonfiction judge of the National Book Awards. Gabler is currently a professor for the MFA program at Stonybrook Southampton.

Joe Barrett’s 30 years as an actor includes appearances off Broadway in Reunion and on Broadway in Raggedy Ann. His television credits include The Conan O’Brien Show and The David Letterman Show. He has appeared in features films and has been seen in dozens of commercials.