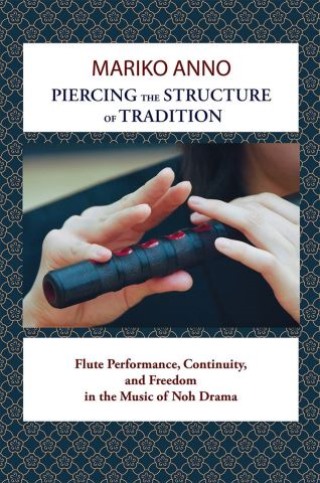 Piercing the Structure of Tradition

Flute Performance, Continuity, and Freedom in the Music of Noh Drama

What does freedom sound like in the context of traditional Japanese theater? Where is the space for innovation, and where can this kind of innovation be located in the rigid instrumentation of the Noh drama? In Piercing the Structure of Tradition, Mariko Anno investigates flute performance as a space to explore the relationship between tradition and innovation. This first English-language monograph traces the characteristics of the Noh flute (nohkan), its music, and transmission methods and considers the instrument's potential for development in the modern world. Anno examines the musical structure and nohkan melodic patterns of five traditional Noh plays and assesses the degree to which Issō School nohkan players maintain to this day the continuity of their musical traditions in three contemporary Noh plays influenced by Yeats. Her ethnographic approach draws on interviews with performers and case studies, as well as her personal reflection as a nohkan performer and disciple under the tutelage of Noh masters. She argues that traditions of musical style and usage remain influential in shaping contemporary Noh composition and performance practice, and the existing freedom within fixed patterns can be understood through a firm foundation in Noh tradition.

Mariko Anno is associate professor at Tokyo Institute of Technology (Tokyo Kogyo Daigaku). Anno is a specialist in the noh flute and well versed in the musical aspects of noh. Her research examines the creative processes in transforming Japanese noh into English language productions and analyzing the text-music relationship of the two disparate languages. She is a member of the English noh troupe, Theatre Nohgaku, and has performed with them in Japan, China, Hong Kong, and the United States.