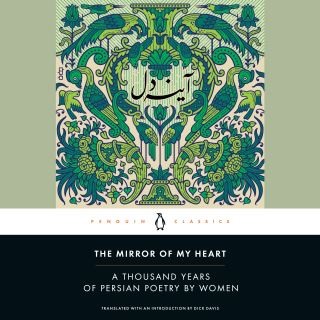 The Mirror of My Heart

A Thousand Years of Persian Poetry by Women

An anthology of verse by women poets writing in Persian, most of whom have never been translated into English before, from acclaimed scholar and translator Dick Davis.

The Mirror of My Heart is a unique and captivating collection of eighty-three Persian women poets, many of whom wrote anonymously or were punished for their outspokenness. One of the very first Persian poets was a woman (Rabe'eh, who lived over a thousand years ago) and there have been women poets writing in Persian in virtually every generation since that time until the present. Before the twentieth century they tended to come from society's social extremes--many were princesses, some were entertainers, but many were wives and daughters who wrote simply for their own entertainment, and they were active in many different countries - Iran, India, Afghanistan, and areas of central Asia that are now Uzbekistan, Turkmenistan, and Tajikistan. From Rabe'eh in the tenth century to Fatemeh Ekhtesari in the twenty-first, the women poets found in The Mirror of My Heart write across the millennium on such universal topics as marriage, children, political climate, death, and emancipation, recreating life from hundreds of years ago that is strikingly similar to our own today and giving insight into their experiences as women throughout different points of Persian history. The volume is introduced and translated by Dick Davis, a scholar and translator of Persian literature as well as a gifted poet in his own right.

*This audiobook includes a PDF that contains notes from the book.

Dick Davis: Dick Davis is a translator, a poet, and a scholar of Persian literature who has published more than 20 books. He is currently a professor of Persian at Ohio State University and a fellow of the Royal Society of Literature. His translations from Persian include The Lion and the Throne, Fathers and Sons, and Sunset of Empire: Stories from the Shahnameh of Ferdowsi, vols. I, II, III.

Mozhan Marnò has appeared in such films as The Stoning of Soraya M., Traitor, and Charlie Wilson’s War, and on such television programs as House of Cards, The Blacklist, Hung, The Mentalist, Bones, and Medium.