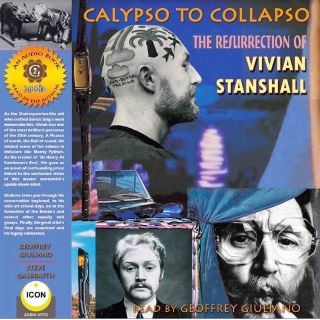 Calypso to Collapso; The Resurrection of Vivian Stanshall

Vivian Stanshall was the quintessential pop hero of the 60s, 70s and 80s. Viv shot to fame in 1968 in the BONZO DOG DOO-DAH BAND, but as many listeners of the John Peel Show are aware, his tales of the upper-class Rawlinsons and Maynards were the bees knees for anyone with a warped sense of humour.
Born Victor Anthony Stanshall, 21 March 1943, Shillingford, Oxfordshire, his post-WWII family settled in the coastal town of Leigh-on-Sea, in Essex. From bingo-caller to painting fairground attractions (and a spell in the merchant navy), Stanshall enrolled at London’s Central School of Art and Design. It was there in September 1962, he met Roger Ruskin Spear, Rodney Slater and Neil Innes (the latter attended nearby Goldsmiths College) and, with other equally unorthodox musicians, formed The BONZO DOG DOO-DAH BAND.
They appeared in the Beatles ' Mystery Tour' movie in 1967, to an off-kilter Top 10 hit with `I’m The Urban Spaceman’ a year later,
As the BONZO DOGS decided to split in early 1970 (after four LPs: `Gorilla’, `The Doughnut In Granny’s Greenhouse’, `Tadpoles’ and `Keynsham’), it gave an opportunity for Viv to explore his inner-characters on a few 45s.
As contractual duties led Viv back to the BONZOS to 1972’s 'Let’s Make Up And Be Friendly’ – showcasing the sophisticated, spoken-wordsmith’s introduction to Sir Henry, via the 9-minute `Rawlinson End’.
Probably thinking that young Mike Oldfield’s titanic `Tubular Bells’ would never be the success it became, Stanshall’s MC-sonic word-play would be an essential ingredient to the final minutes of side one. He never got paid.
Having divorced first wife in 1975, he subsequently settled down with American writer Pamela `Ki’ Longfellow in their houseboat (the Searchlight). Viv also deposited a few tales of his comic characters from Sir Henry for John Peel’s Radio 1 show, and it was time to piece it all together in the adventures of 'Sir Henry At Rawlinson's End'.