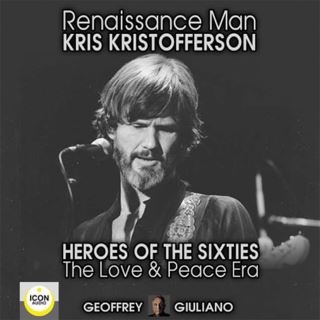 Renaissance Man; Kris Kristofferson; Heroes of the Sixties, The Love and Peace Era

Kristoffer Kristofferson is an American singer-songwriter and actor. Among his songwriting credits are the songs "Me and Bobby McGee", "For the Good Times", "Sunday Mornin' Comin' Down", and "Help Me Make It Through the Night", all of which were hits for other artists. Kristofferson composed his own songs and collaborated with Nashville songwriters such as Shel Silverstein In 1985, Kristofferson joined fellow country artists Waylon Jennings, Willie Nelson and Johnny Cash in forming the country music supergroup The Highwaymen, and formed a key creative force in the outlaw country music movement that eschewed the Nashville music machine in favor of independent songwriting and producing. In 2004, Kristofferson was inducted into the Country Music Hall of Fame. He is also known for his starring roles in Alice Doesn't Live Here Anymore, Heaven's Gate, Blume in Love, Blade and A Star Is Born, the last of which earned him a Golden Globe Award for Best Actor. In this invocative memoir Kris remembers his dear friend Jimi Hendrix.
Musical consultant Alex Franchi in Milan
Production executive Avalon Giuliano in London
ICON Intern Eden Giuliano in Delhi
Music By AudioNautix With Their Kind Permission
©2020 Icon Audio Arts (P) 2020 Icon Audio Arts LLC