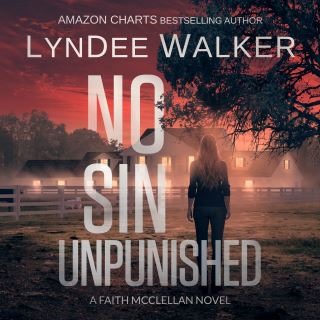 When a serial killer leaves a string of victims with political ties, it sends Texas Ranger Faith McClellan into a desperate race to save lives—even the ones she’s not sure deserve saving.

While on special assignment to the bank fraud unit, Faith accidentally stumbles upon a raging fire consuming the back of a nearby house. When partially cremated remains are pulled from the ruins, she finds herself back on homicide—and on the trail of a ruthless killer.

As she races to identify the victims, the sadistic murderer strikes again, this time against state politicians with ties to Faith’s father, a former governor of Texas. Faith is forced to face shocking and long-buried family secrets as she questions her confidence in the justice system and those she thinks she knows best.

Soon, Faith and her colleagues realize they are hunting a killer with a personal vendetta, whose ferocious methods of murder are punishment for unimaginable sins of the past.

Everyone is a suspect. The pressure is on. Now Faith must piece together clues from the ashes—before her whole life goes up in flames.

LynDee Walker is the national bestselling author of two crime fiction series featuring strong heroines and “twisty, absorbing” mysteries. Her first Nichelle Clarke crime thriller, FRONT PAGE FATALITY, was nominated for the Agatha Award for best first novel, and in 2018, she introduced readers to Texas Ranger Faith McClellan in FEAR NO TRUTH. Reviews have praised her work as “well-crafted, compelling, and fast-paced,” and “an edge-of-your-seat ride” with “a spider web of twists and turns that will keep you reading until the end.” Before she started writing fiction, LynDee was an award-winning journalist who covered everything from ribbon cuttings to high level police corruption, and worked closely with the various law enforcement agencies that she reported on. Her work has appeared in newspapers and magazines across the U.S. Aside from books, LynDee loves her family, her readers, travel, and coffee. She lives in Richmond, Virginia, where she is working on her next novel when she’s not juggling laundry and children’s sports schedules.