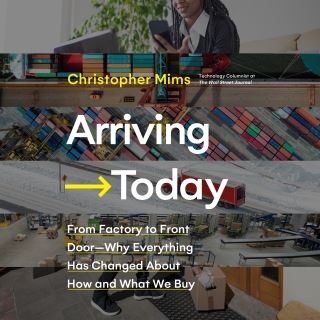 We are at a tipping point in retail history. While consumers are profiting from the convenience of instant gratification, rapidly advancing technologies are transforming the way goods are transported and displacing workers in ways never before seen.

In Arriving Today, Christopher Mims goes deep, far, and wide to uncover how a single product, from creation to delivery, weaves its way from a factory on the other side of the world to our doorstep. He analyzes the evolving technologies and management strategies necessary to keep the product moving to fulfill consumers’ demand for “arriving today” gratification. Mims reveals a world where the only thing moving faster than goods in an Amazon warehouse is the rate at which an entire industry is being gutted and rebuilt by innovation and mass shifts in human labor practices. He goes behind the scenes to uncover the paradoxes in this shift—into the world’s busiest port, the cabin of an 18-wheeler, and Amazon’s automated warehouses—to explore how the promise of “arriving today” is fulfilled through a balletic dance between humans and machines.

The scope of such large-scale innovation and expended energy is equal parts inspiring, enlightening, and horrifying. As he offers a glimpse of our future, Mims asks us to consider the system’s vulnerability and its resilience, and who shoulders the burden, as we hurtle toward a fully automated system—and what it will mean when we are there.

Christopher Mims writes Keywords, a weekly technology column, for the Wall Street Journal. Before joining the Journal in 2014, he was the lead technology reporter for Quartz, and has written on science and tech for MIT Technology Review, Smithsonian, Wired, Atlantic, and Scientific American, among other outlets. He has a degree in neuroscience and behavioral biology from Emory University and lives in Baltimore, Maryland.