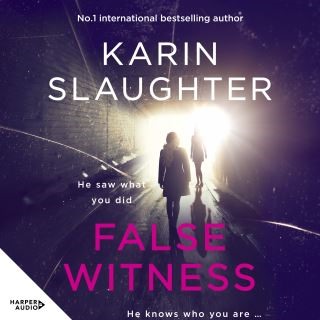 He saw what you did ... He knows who you are. The stunning new standalone from the no.1 international bestselling author

They thought they'd got away with it ... they were wrong.

Leigh and her sister Callie are not bad people - but one night, more than two decades ago, they did something terrible. And the result was a childhood tarnished by secrets, broken by betrayal, devastated by violence.

Years later, Leigh has pushed that night from her mind and become a successful lawyer - but when she is forced to take on a new client against her will, her world begins to spiral out of control.

Because the client knows the truth about what happened twenty-three years ago. He knows what Leigh and Callie did. And unless they stop him, he's going to tear their lives apart ...

Just because you didn't see the witness ... doesn't mean he wasn't there.

'Heart-stopping one moment, heart-breaking the next. Slaughter at her finest' Cara Hunter, bestselling author of All the Rage

'Keeps you gasping and guessing until the end' Stacey Abrams, author of While Justice Sleeps

'An unputdownable story that will move you to the core' Camilla Lackberg, author of the Fjallbacka series

Karin Slaughter is one of the world's most popular and acclaimed storytellers. Published in 120 countries with more than 35 million copies sold across the globe, her 20 novels include the Grant County and Will Trent books, as well as the Edgar-nominated Cop Town and the instant Sunday Times bestselling novels Pretty Girls, The Good Daughter, Pieces of Her and The Last Widow. Slaughter is the founder of the Save the Libraries project - a nonprofit organization established to support libraries and library programming. A native of Georgia, Karin Slaughter lives in Atlanta. Her standalone novel Pieces of Her is in development with Netflix and the Grant County and Will Trent series are in development for television.