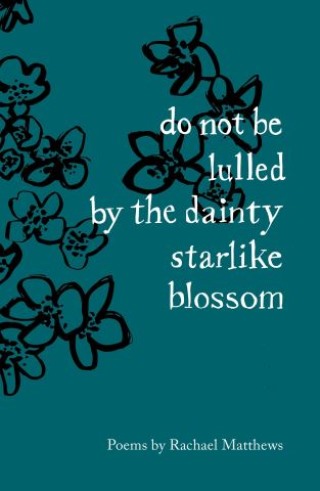 do not be lulled by the dainty starlike blossom

Rachael Matthews is a working-class poet who paints poetic miniatures of domestic and psychological interiors. Her debut pamphlet, do not be lulled by the dainty starlike blossom, is a playful, dark meditation on the queer body as site of pleasure, connection, fertility, loss and trauma. Matthews finished writing these poems during lockdown, while she was heavily pregnant with her daughter. It was an unwitnessed pregnancy, experienced in isolation from friends and family, and invisible to the psychotherapy patients she was treating virtually when New York City became the global epicentre of the pandemic. Resilience and hope are woven into its DNA.

Rachael Matthews: Rachael Matthews was born near Sheffield and grew up on a housing estate in Great Yarmouth in Norfolk. Her ancestors were steel workers and circus performers. A former BBC Radio journalist and newsreader in London, she re-trained as a Psychoanalytic Psychotherapist, via a Masters Degree in Creative Writing and a PhD at Sussex University exploring trauma and creativity. For the past several years she has worked as a clinician at a non-profit therapy centre in New York City, where she has lived for a decade with her wife, and more recently their baby daughter. Her poems have been widely published during that time, winning prizes in a number of major UK competitions.