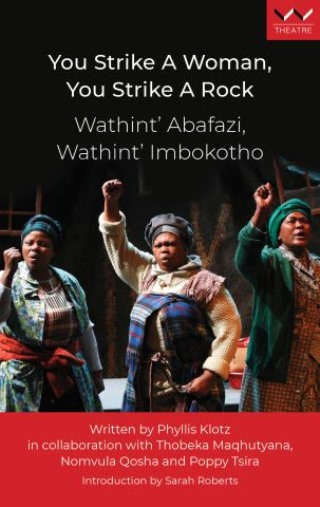 You Strike a Woman, You Strike a Rock / Wathint’ Abafazi, Wathint’ Imbokotho is a bristling example of protest theatre making during the height of apartheid. Created in ensemble fashion in 1986 by director Phyllis Klotz in collaboration with performers Thobeka Maqhutyana, Nomvula Qosha and Poppy Tsira, this play stands as a contemporary South African classic.
The play focuses on three central characters: Sdudla, Mambhele and Mampompo living and working in a Cape Town township trying to eke out a living in a racially, socially and economically unequal world. There are few work opportunities and there is a great deal of red tape to be self-sufficient. Men are glaringly absent from this world – working as cheap migrant labour in urban areas. Women have to undertake great risk to see their husbands and to try keep a semblance of family cohesiveness. Helicopters fly above and state security police surveil the area. The play shows how these women work miracles to ensure the survival and well-being of their families at all cost.
Following the famous 1956 slogan of the South African woman’s march against apartheid laws, this latest publication in 2021 is a testament to the contemporariness of this play. Its themes around gender activism and the need for gender parity remains as true today as it did fifty years ago. Fresh and full of life, this is an important historical document and will be a landmark play for high schools and students of theatre.

Phyllis Klotz is a writer and director who has been involved in Development Theatre, Educational Theatre and vocational training. In 1985 she formed The Young Peoples Theatre Education Trust, and the Sibikwa Community Theatre Project with Smal Ndaba in 1988. She has been the recipient of several awards for their contribution to South African Theatre, including the Naledi Life Time Achievement Award.

Thobeka Maqhutyana attended drama classes at St Francis Cultural Centre in Langa, Cape Town, before becoming involved in the Community Arts Project from 1984-1985. After touring extensively with the play Wathint’ Abafazi, Wathint’ Imbokotho she appeared in several TV series including the Sibikwa production of the African opera Ubuntu Bomhlaba. She died in 2002.

Nomvula Qosha performed in the original Wathint’ Abafazi, Wathint’ Imbokotho and runs her own crèche in KTC, Cape Town. She trained at the Waldorf Centre for Creative Education and the Foundation for Community Workers.

Poppy Tsira is a performer and Wathint’ Abafazi, Wathint’ Imbokotho was her first professional stage role. She joined the Community Arts Project performing arts programme from 1984-1985. She has appeared in several adverts, films and TV series, and performed in the revival of Wathinta in 2006.