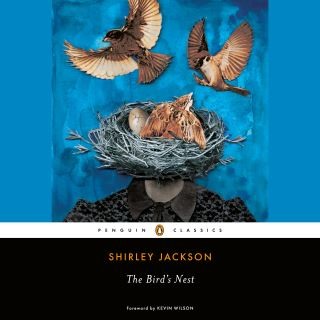 Elizabeth is a demure twenty-three-year-old wiling her life away at a dull museum job, living with her neurotic aunt, and subsisting off her dead mother’s inheritance. When Elizabeth begins to suffer terrible migraines and backaches, her aunt takes her to the doctor, then to a psychiatrist. But slowly, and with Jackson’s characteristic chill, we learn that Elizabeth is not just one girl—but four separate, self-destructive personalities. The Bird’s Nest, Jackson’s third novel, develops hallmarks of the horror master’s most unsettling work: tormented heroines, riveting familial mysteries, and a disquieting vision inside the human mind.

For more than seventy years, Penguin has been the leading publisher of classic literature in the English-speaking world. With more than 1,700 titles, Penguin Classics represents a global bookshelf of the best works throughout history and across genres and disciplines. Readers trust the series to provide authoritative texts enhanced by introductions and notes by distinguished scholars and contemporary authors, as well as up-to-date translations by award-winning translators.

Shirley Jackson: Shirley Jackson (1916–1965) received wide critical acclaim for her short story “The Lottery,” which was first published in the New Yorker in 1948. Her works available from Penguin Classics include We Have Always Lived in the Castle, The Haunting of Hill House, and Come Along with Me and Life Among the Savages available from Penguin.

Kevin Wilson is the bestselling author of The Family Fang and the recipient of a Shirley Jackson Award for his story collection Tunneling to the Center of the Earth. His writing has appeared in Tin House, One Story, and other publications. He lives in Sewanee, Florida.