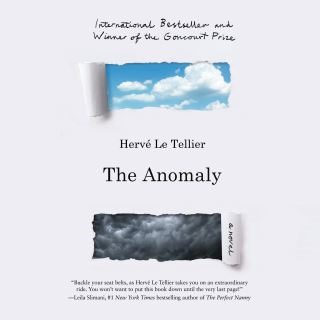 Winner of the Prix Goncourt, this dizzying literary page-turner ingeniously blends crime, fantasy, sci-fi, and thriller as it plumbs the mysteries surrounding a Paris-New York flight.

In June 2021, a senseless event upends the lives of hundreds of men and women, all passengers on a flight from Paris to New York. Among them: Blake, a respectable family man, though he works as a contract killer; Slimboy, a Nigerian pop star tired of living a lie; Joanna, a formidable lawyer whose flaws have caught up with her; and Victor Miesel, a critically acclaimed yet commercially unsuccessful writer who suddenly becomes a cult hit.

All of them believed they had double lives. None imagined just how true that was.

A virtuoso novel where logic confronts magic, The Anomaly explores the part of ourselves that eludes us. This witty variation on the doppelgänger theme, which takes us on a journey from Lagos and Mumbai to the White House, proves to be Hervé Le Tellier’s most ambitious work yet.

Hervé Le Tellier: Hervé Le Tellier is a writer, journalist, mathematician, food critic, and teacher. He has been a member of the Oulipo group since 1992 and one of the “papous” of the famous France Culture radio show. His books include A Thousand Pearls (for a Thousand Pennies), Enough About Love, Eléctrico W, and All Happy Families.