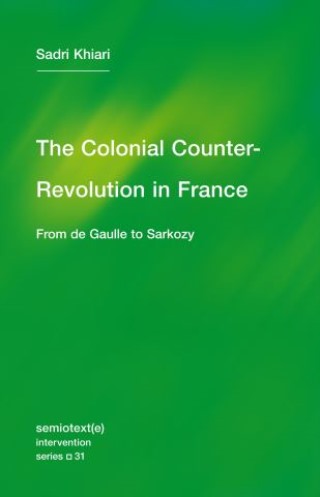 From de Gaulle to Sarkozy

How and when American-style slavery created the racial system, not just in the United States but internationally.

"We see the hatred we elicit, Islamophobia, Negrophobia; we see police numbers increase, repression spread, mechanisms of control and surveillance strengthened, structures of corruption and cronyism flourish, and bodies of institutionalization, integration, and supervision develop, but we do not see the cause, or one of the causes, which is none other than the threat that we now pose to the white order."
--from The Colonial Counter-Revolution

Just as Capital produced classes and patriarchy produced genders, colonialism produced race. In The Colonial Counter-Revolution, Sadri Khiari outlines how and when American-style slavery created the racial system, not just in the United States but internationally, and why the development of relationships of equality within the white community favored the crystallization of specifically racial social relations. More than just a response to the dialogue, debate, and trauma of immigration today, this book looks beyond the right/left dichotomy of the issue in politics to the more fundamental political existence of immigrants and Blacks, who must exist politically if they are to exist whatsoever. Race is not biological: race is political. And it is the manifestation of the colonial counter-revolution. In France, that counter-revolution started with General de Gaulle, and continues today, where the anti-colonialist fight of Palestinian Arabs and the anti-racist fight of Arabs and blacks in France have the same adversary: white Western domination.

Sadri Khiari: Sadri Khiari holds a doctorate in political science. A member of the Tunisian democratic opposition, he currently lives in France.