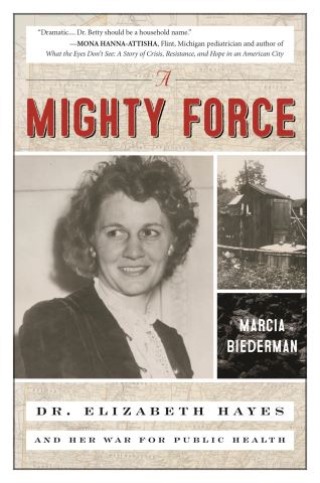 Dr. Elizabeth Hayes and Her War for Public Health

In the last half of 1945, news of the war’s end and aftermath shared space with reports of a battle on the home front, led by a woman. She was Elizabeth O. Hayes, MD, doctor for a coal company that owned the town of Force, PA, where sewage contaminated the drinking waters, and ambulances sank into muddy unpaved roads while corrupt managers, ensconced in Manhattan high-rises, refused to make improvements.

When Hayes resigned to protest intolerable living conditions, 350 miners followed her in strike, shaking the foundation of the town and attracting a national media storm. Press – including women reporters, temporarily assigned to national news desks in wartime – flocked to the small mining town to champion Dr. Hayes’ cause. Slim, blonde, and 33, “Dr. Betty” became the heroine of an environmental drama that captured the nation’s attention, complete with mustache-twirling villains, surprises, setbacks, and a mostly happy ending.

News outlets ranging from Business Week to the Daily Worker applauded her guts. Woody Guthrie wrote a song about her. Soldiers followed her progress in the military newspaper Stars and Stripes, flooding her with fan mail. A Philadelphia newspaper recommended Dr. Betty’s prescription to others: “Rx: Get Good and Angry.” President Harry S. Truman referred her grievances to his justice department, which handed her a victory.

A Mighty Force is the only book, popular or academic, written about Hayes. Readers interested in feminism, the environment, corporate accountability, and the World War II home front will be excited to discover this engaging, untold episode in women’s history. Fortunately, a fascinated press captured Hayes’s words and deeds in scores of news pieces. Author Marcia Biederman uses these pieces, written by major news outlets and tiny local papers, as well as interviews with descendants, letters written by Hayes’s opponents, union files, court records, an observer’s scrapbook, mining company data, and a journalist’s oral history to tell the story of Dr. Betty and her pursuit of public health for the first time.

Marcia Biederman has contributed more than 150 articles to the New York Times, writing about everything from ice dancing to automobile wheel repair. She was a staff reporter for Crain’s New York Business and an editor for Chain Store Age. Her work has appeared in New York magazine, the New York Observer, and Newsday. She is the author of several books including Popovers and Candlelight: Patricia Murphy and The Rise and Fall of a Restaurant Empire, published by SUNY Press in 2018, and Scan Artist: How Evelyn Wood Convinced the World That Speed Reading Worked, published by Chicago Review Press in 2019.