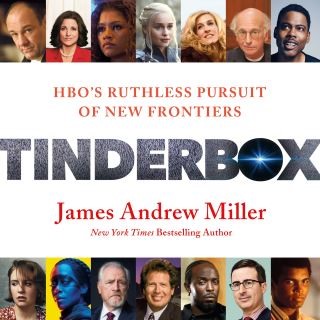 From the New York Times bestselling author of Those Guys Have All the Fun comes Tinderbox, the unvarnished, comprehensive, and astonishing history of HBO, told for the first time through the disruptors who led its epic rise to prestige and changed the way we watch television forever.

The exclusive story of HBO’s key creators, executives, actors, and directors gives readers an unprecedented peek behind the curtain at the founding and triumph of the first “pay-channel” that brought America The Sopranos, Sex and the City, The Wire, Succession, and countless groundbreaking, culture-shifting shows. James Andrew Miller collects insider accounts of the humble beginnings, devastating missteps, controversial business decisions, and, of course, backstage drama and celebrity gossip from the set.

Since televisions entered Americans’ living rooms, the question of whether programming should be “free”—paid for with advertising—has loomed, to the extent that some broadcasters, lobbyists, and fearmongers warned someone would come along and disrupt their Madison Avenue–championed business model. But who would pay for something that had always been free? Home Box Office dared to ask that question in 1972, opening the doors for other pay-channels and ultimately the streaming platforms that are now the norm. They created different, better content—or at least they convinced viewers that different was better. HBO gave us violent scenes with blood and guts, shows like Tales from the Crypt that were actually scary, rom-coms with sex instead of suggestion. We take their big-budget, “prestige” TV for granted now, but their success was far from assured at the outset.

HBO’s audacity built the viewing culture we have today and permanently transformed the television landscape.

James Andrew Miller: James Andrew Miller is an award-winning journalist and the bestselling author of Those Guys Have All the Fun: Inside the World of ESPN; Live from New York: The Complete, Uncensored History of Saturday Night Live; Powerhouse: The Untold Story of Hollywood’s Creative Artists Agency; and Running in Place: Inside the Senate. He received his BA from Occidental College, his MLitt from Oxford University, and an MBA from Harvard University.