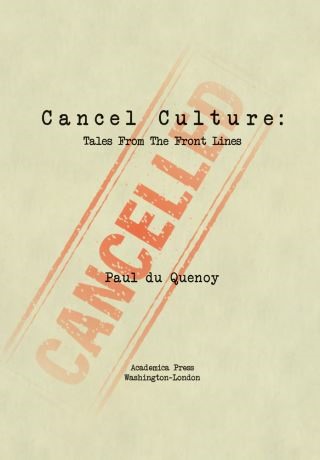 Tales from the Front Lines

What is “cancel culture.” A new phrase in popular circulation for less than two years, it has provoked passionate denunciations from observers concerned with civil liberties, especially rights of free speech and expression, and apologetic defenses from opponents who advocate equity and accountability in light of new mores. Still others deny that “cancel culture” exists at all, while many claim never to have heard of it. In Cancel Culture: Tales from the Front Lines, noted historian and critic Paul du Quenoy presents a series of case studies that reveal the new phenomenon known as “cancel culture” as experienced or claimed in media, academia, the arts, public space, and other areas of ideological controversy. More than a bald denunciation or frustrated description of an unfamiliar new concept, this groundbreaking approach seeks to understand “cancel culture” as a process – how it starts and stops, where it comes from and leads, and how and, indeed, whether it might one day end. This penetrating and highly original analysis sheds light on a society grappling feverishly with fundamental issues of freedom and liberty.

Paul du Quenoy: Paul du Quenoy is President of the Palm Beach Freedom Institute and President and Publisher of Academica Press. A historian and critic, he has taught at multiple universities in the United States and abroad and is the author of four other books. He holds a Ph.D. in History from Georgetown University.